Updated weekly by our team in Ennis. What seemed like a never ending summer of high temperatures and nasty smoke has quickly transitioned into the highly anticipated season of fall. In addition to the brisk weather, the town of Ennis was greeted with snow on the peak’s of both the Madison and Tobacco Root ranges Sunday morning. With the deciduous trees beginning to embark on their annual change of color, there is no doubt that fall is in the air. The overall quality of fishing this last week has been less than optimal. The fish that have been successfully fooled have been few and far between. With that being said, there is still the opportunity for some awesome fish to be caught this week for those who are willing to brave the wind and cold.

Streamer fishing over the last week has brought in some quality fish. Both methods of dead drifting and furiously stripping have triggered aggressive takes in predatory fish. Cast your streamer upstream towards the bank or at a rock pocket and play around with your retrieval pace. Popular streamers this week have been the Mini Loop Sculpin in natural (#6), Barely Legal in olive/white(#6), Mini Dungeon in both black and green(#6), and the Delektable Single Screamer in white (#6).

Montana FWP will be continuing their annual fall shocking on the Madison this week. The schedule goes as follows:

We are still seeing lots of pressure on the river so expect to see some crowding at ramps in the afternoon. Be patient and help others out when you can at the ramp so that everyone can pull out in an orderly and efficient manner. We also urge you to practice proper fish handling. Get those fish in quick and keep them wet! Avoid fish pictures for the gram whenever possible so that we can continue to have healthy fish populations for years to come. 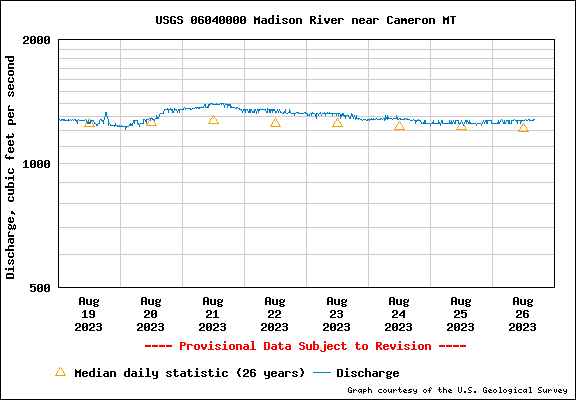 SWINGIN' UP SOMETHING NEW

September 2021Updated 9/9/2021After a week of cooler temperatures and some rain, we have been experiencing a resurgence of summer with...
Continue reading

September 2021Updated 9/2/2021With cooler temps and some much needed precipitation,  the Hoot Owl has been lifted on the upper and...
Continue reading

August 2021Updated 8/26/2021Where has the summer gone? It seems as if it was just last week that we were desperately...
Continue reading

August 2021Updated 8/17/2021Late summer has fallen upon us on the upper Madison River; with cooler temperatures predicted for the next...
Continue reading
View all

The dog days of summer are upon us. Keep them wet and wander aimlessly.